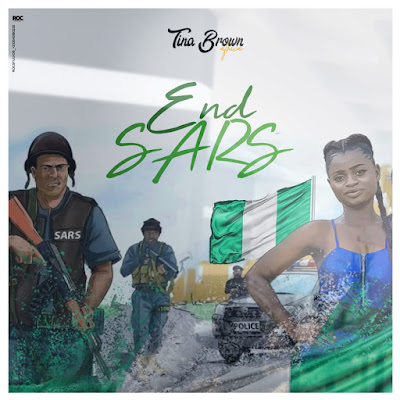 Ghana afrobeat sensation Tina Brown Africa releases her latest record, End SARs, which joins her records titled Pandemic and Racism which she has also lent her voice to regarding recent events that have disappointedly affected Black and Brown people. The End SARs movement hits close to home for Tina, who was born in Lagos State, Nigeria and still have family which resides there. Tina is of the opinion that the Special Anti Robbery Squad (SARs) are incompetent and need to be brought to justice for the murder of the innocent youth in her birth country. She stated that there’s no need for them once we already have the police. They are wicked and there is no purpose for them. With End SARs, Tina joins other prominent Nigerian musicians who have called for the disbandment of SARs.
Connect With Tina Brown Africa
Instagram: https://found.ee/A3o8
Facebook: https://found.ee/RvrYp
Twitter:  https://found.ee/cp84
About Tina Brown
Tina Brown Africa, Born Tina Brown in Surulere in Lagos State, Nigeria where she spent most of her childhood and later moved to Ghana to further her High School education. She is the newest, trailblazing Afro artist in Ghana and is poised to take the world by storm. Tina started singing early in her childhood. She found enjoyment in singing and performing in her school programs. She began professionally making music in 2018 directly after High School. She is fluent and sings in English Yoruba (Nigerian), Twi (Ghana), and Ewe which is also a Ghana language spoken by the Volta Tribe (Togo). Her music spans the genres of Afropop, AfroBeats and AfroDanceHall.
DOWNLOAD AUDIO HERE