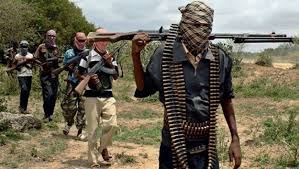 Queen Florence Ikhumhen, wife of the Onojie of Ewatto community in Esan South East local government of Edo state, His Royal Highness Ikhumhen 11, has been kidnapped by gunmen suspected of be kidnappers.One of her daughters was also abducted by the gunmen. Queen Ikhumhen just retired as the Principal of Itohan Grammar School, Benin city.She was abducted on Sunday nightalong with her daughter at their Bénin City  residence around Jemilla area in Ikpoba-Okha local government area.The gunmen were said to have shot sporadically into the air before taking their victims.They were said to have taken them away in a speed boat through the Ikpoba River.The incident was reported to the Ikpoba Hill police station immediatelySources said the kidnappers have made contact with the family but the amount being demanded was unknown.Spokesman for the Edo police command, DSP Chidi Nwabuzor, said he has been informed about the incident.He said investigation was ongoing.