Funny!!: Woman says she swallowed engagement ring in her sleep 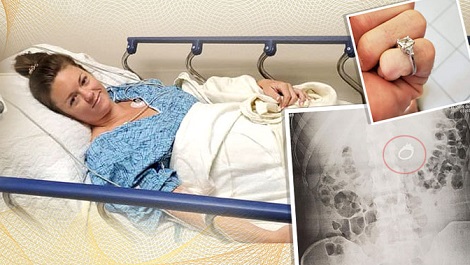 A woman's engagement ring was lost and found ... in her intestine, according to the woman's viral Facebook post.Jenna Evans of San Diego wrote on Facebook that she swallowed the ring in her sleep. She said she had a vivid dream in which her fiancé told her to swallow the ring to protect it from "bad guys," and she apparently went through with this while she was half-awake."I popped that sucker off, put it in my mouth and swallowed it with a glass of water riiiight about the time I realized what I was doing," Evans wrote in the post. "I assumed this too was a dream, because WHO ACTUALLY SWALLOWS THEIR ENGAGEMENT RING, so I went back to sleep."However, when she woke up the next day, she realized her ring really wasn't on her hand and that she had indeed swallowed the piece of jewelry.At urgent care, she had a hard time explaining what happened because she was "laughing/crying so hard," she said.An X-ray showed that the ring truly was in the woman's stomach. Doctors decided it was best to get the ring out as soon as possible and not let it pass through her digestive system.Evans underwent a procedure called an upper endoscopy, in which doctors use a thin, flexible tube with a camera to look at the esophagus, stomach and part of the small intestine. Doctors successfully retrieved the ring, which they found in Evans' intestine just beyond her stomach."I promised not to swallow it again, we're still getting married and all is right in the world," Evans wrote.Evans' doctor also recommended that she see a sleep specialist. People usually experience temporary muscle paralysis during the stage of sleep in which dreams occur, known as REM sleep, according to the Mayo Clinic. However, people with a sleep disorder known as REM sleep behavior disorder can physically act out their dreams by talking and moving in their sleep. (It's unclear if Evans has this sleep condition.)